Iwata Norikazu sensei was born in Kochi in 1913, he holds the highest level of certificate in Muso Jikiden Eishen Ryu the so-called Mekyo Kaiden.

Iwata sensei started to learn budo at the age of 11, he started to practise Kendo. At the age of 27, he started to learn Iaido, from the 19. headmaster of the school, Fukui Harumasa sensei. He also learned Iaido from: Mori Shigeki sensei, Suzue Yoshishige sensei, Takaoka Den sensei and Yamamoto Takuji sensei. He practised Iaido for twenty years at Yamamoto sensei, who learned Iaido from Oe Masamichi sensei for seven years on a daily basis. Iwata sensei also attended Aikido practices led by Morehei Ueshiba sensei.

Iwata sensei is the headmaster of Roshukai in Japan, he is the only living teacher who really knows the way Oe Masamichi sensei was thinking about the form exercises in Iaido. His unique Iaido style is a rich source of the teaching of his masters, and the masters of his masters. He wrote three books on Iaido, and several articles in the Kendo Nippon magazine. Iwata sensei’s teaching and publications let us know the tradition of his masters, especially the teaching of the founder of Muso JikiDen Eishen Ryu, Oe Masamichi (Roshu) sensei. 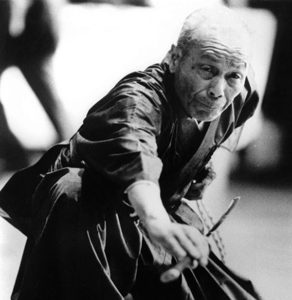