Questions and Answers about Iaido​ 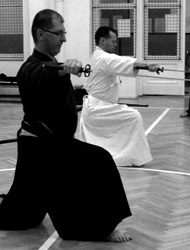 *The Japanese word i-ai consists of two parts, i: sitting position, ai: meeting the enemy. Later on,
during the 16. century, Japanese swordsmen made this word more general, applying it to other similar situations, such
as: -standing, walking, sitting in armour.

**There are some Iaido schools where students practise not only single form exercises against imaginery
opponents, but also form exercises performed by two persons using wooden swords (kumitachi).